As a new-elected Atlanta City Council President Doug Shipman (95C) said he was able to merge Atlanta’s past and present to usher in an era of rebuilding, renovation, affordability and inclusivity at a turning point in the city’s history.

Shipman, who was elected in November and will complete his first month in office Feb. 3, is determined to change Atlanta’s growth trajectory.

An Emory alumnus, Shipman credits Emory for sparking his passion for positive change and setting him on the path that led him to his current leadership role in Atlanta.

Shipman’s commitment to ensuring equity across economic and racial divides defined his post-Emory career. He served as CEO of the National Center for Civil and Human Rights, the Woodruff Arts Center and BrightHouse Consulting and was a member of the board of directors of The Carter Presidential Center and the Anti-defamation League, among other organizations.

The Wheel sat down with Shipman to discuss Emory’s experiences and beyond, opened up about his path as well as his plans and vision for his upcoming tenure.

Responses have been lightly edited for clarity and length.

Emory Wheel: What was it like to be a preacher’s child and did that influence your involvement in civil rights?

DS: My mom was a Sunday school teacher, my dad had been a preacher before I was born, and I grew up in a small town in Arkansas, so I’ve always been interested in religion. When I came to Emory, I was very interested in the diversity of Atlanta and the civil rights heritage here. I used to go to services at Old Ebenezer and the songs they sang at Ebenezer were the same songs we sang at my church in Arkansas, so immediately I felt a kinship. Then, while I was at Emory, I studied religion, race, and the Constitution, and all these different identity courses; I was really trying to soak up Atlanta! This combination led me to Robert Franklin’s course on Martin Luther King Jr. and Malcolm X as theologians that brought it all together; it had an aspect of religious and social movement, and of history. 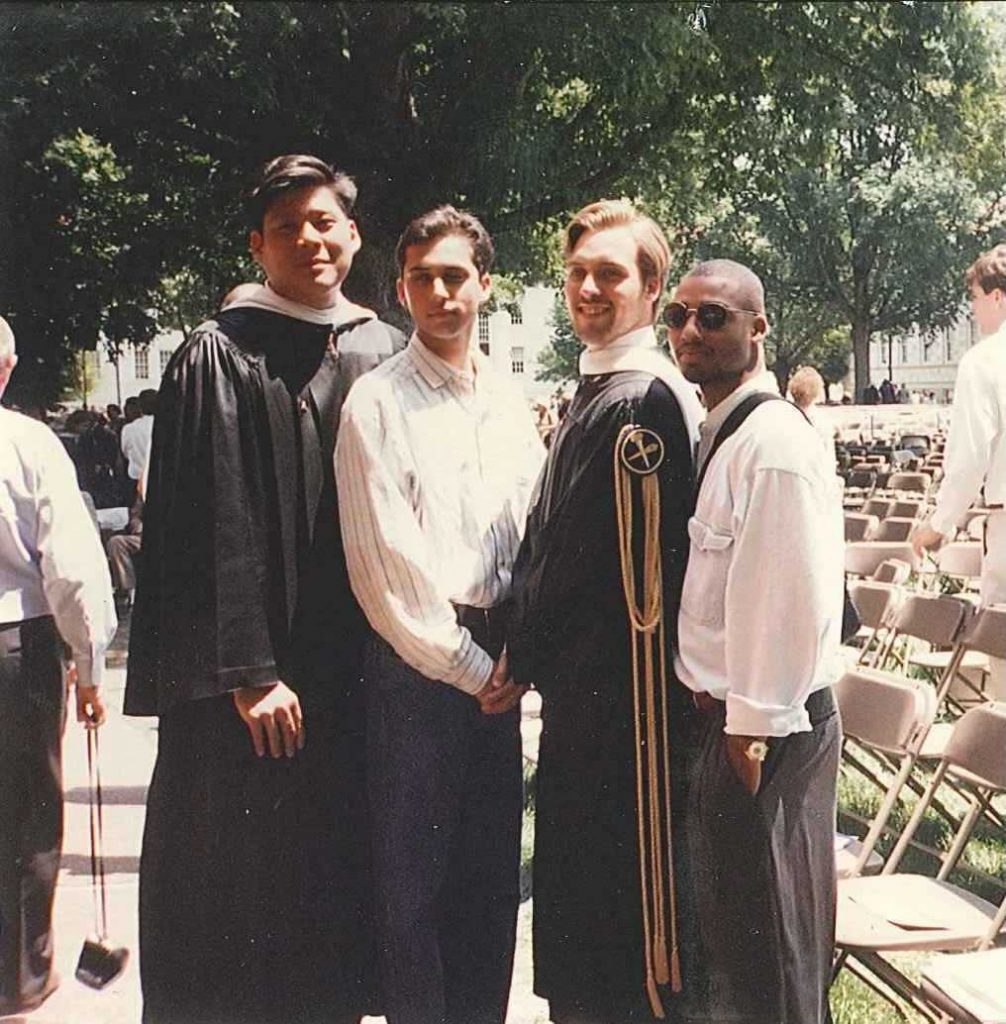 Doug Shipman (95C) (second from right) at his graduation from Emory College of Arts and Sciences in 1995. (courtesy Doug Shipman)

EW: A significant portion of your career has been spent contributing to the development and direction of the National Center for Civil and Human Rights. Can you explain when you decided to shift your focus from the nonprofit world to the political world?

DS: In fact, it’s the opposite! I did my graduate studies in public policy and theology. While at Harvard [for graduate school], I worked on a presidential campaign in New Hampshire. I was on staff on Capitol Hill for a summer, and I was surrounded by civil servants and politicians and politicians the whole time, so I had a lot of experience in the public world.

Then I went into the private sector for a while. I had no intention of building a museum, but that part kind of happened. I decided to run for office because I felt like many of the ways Atlanta had grown over the years were under pressure: the lines of race and religion, and the notion of how the business world, the civic world and the political world could work together. I wanted to try to bring my knowledge and my experience around history and having worked in all these different communities in the public space.

EW: Did former Board Chair Felicia Moore give you any advice before you took office?

DS: The outgoing board chair, Moore, has been incredibly generous – we have met several times. She had incredible advice, ranging from very tactical things to much broader things. One of the things that Council Chairman Moore did really well, and that I want to continue, was bring a lot of transparency. Nowadays, people don’t trust institutions and government in many ways, so I think it’s incumbent on anyone in a position of public service and political leadership to push for transparency.

EW: What are your views on Buckhead’s secession and how do you plan to address this growing problem?

DS: I don’t think Buckhead City solves Buckhead’s problem. The issues that were raised in Buckhead are best addressed as a whole town, and the issues are the same as the issues I hear all over town.

People want to feel safe and have good municipal services and sustainability. Buckhead’s departure would have huge financial implications and bond impacts not just in Atlanta, but across the state. We give up much of our unique national reputation [by seceding], and other cities we compete with for investment will use that against us. A unified city is the best way to address people’s concerns.

EW: Part of your campaign has focused on the growing problem of affordability in Atlanta. How can you make sure there’s affordable housing left in parts of Atlanta where the market is growing dramatically?

DS: Affordability has two aspects. One is to keep a robust anti-displacement policy intact. The other is to develop enough housing overall. We need to think about where we are developing affordable units and whether we are developing units across the price range. Atlanta is very good at dropping and building things, but I want to make sure that we’re not just getting people to drop things and build new things because we might have a better accessibility strategy if we use more renovations.

EW: The Beltline completely transformed Atlanta and is especially popular among Emory students. Do you have future plans to extend the Beltline?

DS: Emory has continued to be an integral part of my life. My wife was a student at Emory, and that’s where I met her. I was the president of the council of elders so I gave back that way and now I sit on the Carter Central Council, appointed by the President of Emory. At the provost’s request, I led as co-chair of the Future of the Arts Task Force a few years ago at Emory. I always feel like Emory was the launch pad for everything that happened in my life – he will always hold a special place for me.

Assistant to the Rector – Episcopal News ...