Mary of Nazareth, the first evangelist

This weekend was the feast of Our Lady of Guadalupe, and also Sunday of Gaudete: a beautiful juxtaposition. So of course a man tried to mess it up. A very stupid professional internet troll has decided to post a hot take on the Virgin Mary on the anniversary of her appearance in Saint Juan Diego in Guadalupe. He retweeted a photo of the miraculous tilma with the caption: “Mary is the greatest saint and queen in heaven. But she evangelized ZERO, literally, because she knew her role.“ 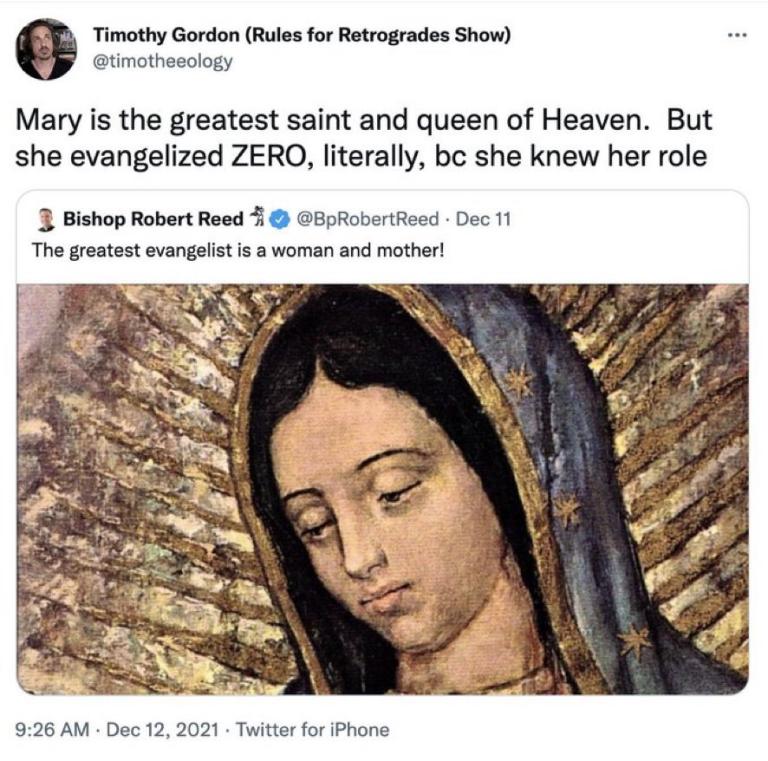 It hurts just to type those words, or post a screenshot of it over such a beautiful picture.

I don’t understand how someone who calls themselves Catholic cannot recognize Miriam of Nazareth as an evangelist.

We generally call Mary Magdalene the first evangelist, but before she came Mary the Mother of Christ.

The Gospel according to Matthew begins with a genealogy, beginning with our father Adam and ending with Joseph, the husband of Mary, the mother of Jesus who is called Christ. And to do this, Matthew is called an evangelist.

The woman by whose consent Joseph became the adoptive father of Jesus called Christ, was she not an evangelist?

The Gospel according to Mark begins with John the Forerunner, wandering in the wilderness, crying out for people and baptizing for the forgiveness of sins. To record this story, Mark is called an evangelist.

Did the bearer of Reason John go out there in the wilderness to cry out, not an evangelist?

Saint John the beloved Apostle opened his gospel with the most glorious poetry: “In the beginning was the Word, and the Word was with God, and the Word was God. He was in the beginning with God. All things were made by him, and without him nothing was done of what was done. In Him was life, and the life was the light of men. And the light shines in the darkness, and the darkness has not understood it. There was a man sent from God, whose name was John. This man came for a witness, to bear witness to the Light, so that everyone would believe through him. He wasn’t that Light, but was sent to testify of that Light. It was the true Light that enlightens every man coming into the world. He was in the world, and the world was made by him, and the world did not know him. He came to his own, and his own did not receive him. But to all who received him, he gave them the right to become children of God, to those who believe in his name: who were born, not of blood, nor of the will of the flesh, nor of the will of man, but of God. And the Word was made flesh and lived among us, and we beheld his glory, the glory of the Only Begotten of the Father, full of grace and of truth.And because he wrote this truth, John is called an evangelist.

The woman that carried that Word when He was made flesh, wasn’t she an evangelist?

The Gospel according to Luke now, which begins with Gabriel. Gabriel goes to see Zacharie, tells him the good news and then silences him. Zechariah cannot tell anyone what is going on and anyway, he has not been told that the Word was made flesh. Then Gabriel appears to Miriam the virgin and gently explains the Lord’s plan. All of history and all of creation silently await her consent, and she consents. By her consent, the Word becomes Flesh, which John describes so beautifully, and Miriam the virgin becomes her true mother. Matthew describes the Incarnation from the perspective of Christ’s ancestors. Mark describes it from the point of view of Saint Joseph. Jean from a point of view both in eternity and in the womb of Mary. Luke describes it from Mary’s point of view.

At this moment, just after the Incarnation, Mary is the only one in the world to know that Christ has come to exist on earth.

So what is going on?

Matthew says that Joseph found out that Mary was pregnant, by the Holy Spirit.

How did he find out?

Someone must have told him. Maybe it was Mary, or someone from the temple where tradition says Mary lived.

How did this person find out?

Mary must have told them.

The first human being to proclaim that Christ was here was to be the Virgin Mary.

Mary was the first evangelist.

What did Marie do then? Did she really “know her role?” Did she hide? No, she ran into the hills to talk to her older cousin Elizabeth. She couldn’t stay where she was. She left to share her strange news with an older woman, the priest’s wife, the woman who must have been his mentor when she was a little girl growing up in the temple. Miriam ran to greet Elizabeth. She greeted her as she entered the house. And at the time of her salvation, the Holy Spirit filled Elisabeth. In Elizabeth’s body, John the Forerunner has his first prophetic moment. He leaps into her stomach and she begins to prophesy.

What made this happen?

The Holy Spirit, sure, but it happened at the sound of Mary’s greeting. The Holy Spirit can use any means to speak to people; the Holy Spirit is God, after all. The instrument that the Holy Spirit used in this case was Mary. Her word, whatever she said when greeting Elizabeth, which was not written for us, woke John.

Mary was the evangelist who made John the Forerunner a prophet.

Elizabeth called blessed Mary, then Mary began to prophesy. His song, his great prophecy, was proclaimed before John began his mission, before the song of Zechariah. She was the first human to tell someone exactly what was going to happen: “My soul magnifies the Lord, And my spirit rejoiced in God my Savior. For he considered the humble condition of his servant; For behold, henceforth all generations will call me blessed. For he who is mighty has done great things for me, And holy is his name. And his mercy is on those who fear him
From generation to generation. He showed strength with his arm. He scattered the proud in the imagination of their hearts. He has brought down the mighty from their thrones, And exalted the humble. He has filled the hungry with good things, And the rich, He sent them away empty. He helped his servant Israel, In remembrance of his mercy, As he spoke to our fathers,

To Abraham and to his posterity forever.

Mary was the evangelist who told Elizabeth exactly what God was doing.

She stayed with Elizabeth until Elizabeth gave birth.

After that, she went to Bethlehem and gave birth to the Word for the whole world. She showed it first to the shepherds, then to the wise men, then brought it to the temple so that Simeon and Anne could see that Christ was here. Mary was the first evangelist to tell her own people and foreign representatives that Christ was born.

And then she took it to Egypt. Mary was the first evangelist to bring Christ to a foreign land.

From there they went to Nazareth and finally brought Jesus to the temple where they lost him for three days, and when they found him he was talking about the Bible with the elders. Mary was angry with him, but he tried to tell her that it was God’s will. Mary had become, to her great sadness and concern, the evangelist who brought Christ to the teachers of the Law.

The Word came to Nazareth and was obedient to him.

The Word grew up and went to the desert to be baptized by his eccentric cousin John; then he sojourned in the desert for forty days and forty nights. And finally, he came home to take his dear mother to a wedding party.

During this feast, Marie pronounced her last words which were transmitted to us: “Do whatever he tells you to do. “And the last words of the Virgin Mary are an eternal command. Mary was the first evangelist to give us a moral teaching.

It appears later, in the gospel of Matthew and Mark, when Jesus says, “Whoever does the will of my Heavenly Father is my brother, sister, and mother. Mary had consented to the Father’s will decades ago, and that is indeed how she became her mother. She followed Jesus to the foot of the cross, received the beloved apostle as her adopted son, and hugged Christ when it was all over. She must have been the one who handed her body over to Joseph and Nicodemus for burial. She became the first evangelist to present the impossible mystery of an immortal God who can die to the disciples of Christ. She was the first evangelist to give the broken Body of Christ to someone.

And then, of course, another Mary, Mary Magdalene, became the evangelist of the Apostles and told them that Christ had risen from the dead.

She was where it all began.

Other than that, I guess you could say she didn’t evangelize zero.

In the beginning was the Word, made flesh in the body of Mary, by the consent of Mary, revealed to the world by Mary.

Nothing that happened afterwards mattered so much.

Mary Pezzulo is the author of Meditations on the Stations of the Cross and Stumbling in Grace: How We Meet God in Tiny Works of Mercy.
Steel Magnificat works almost entirely on tips. To tip the author, visit our donation page.