About 15 years after launching a campaign to build the Arkansas House of Prayer in Little Rock, Episcopal Priest Susan Sims Smith plans to raise funds again, this time to build a similar interfaith prayer center in Mongolia. .

Sims Smith estimates that around $ 1 million will be needed.

She originally intended to launch the fundraising effort in 2020; the global pandemic has forced her to postpone her plans.

“The project is still in the works. The Covid is the only thing that interrupted it,” she said.

Venerable Thupten Kuten-la, Tibetan State Oracle and Spiritual Advisor to the Dalai Lama, shared his vision for a new round meditation hall during a visit to Arkansas in 2016 at the invitation of Sims Smith . Known as Kuten-la, those who seek his guidance see him as an intermediary between the spiritual and human realms.

The location of the last center was never in doubt, she said.

â€œHe told me that the Spirit told him to build it in Mongolia,â€ she said.

“I asked her ‘Why Mongolia?'” She recalls. â€œHe said: ‘There is a deep Buddhist presence there, and that there is a small interfaith community and (…) to strengthen the country and the people, there had to be a place of silence and prayer that could accommodate people of different faiths. “

Sims Smith said he told Kuten-la, through an interpreter, “I feel like the Spirit is urging me to help you with your project.”

He invited her to visit Mongolia in 2017 to celebrate her 60th birthday; she was one of his more than three dozen guests from around the world.

She decided to go, accompanied by her husband and Little Rock photographer Amy Carper. Carper had also captured striking footage of Kuten-la’s stay in Arkansas.

The images will be used to help share the vision for a new interfaith center.

Mongolia, Asia’s largest landlocked country, has a population of around 3.2 million, according to the CIA’s World Factbook. About half – 1.6 million – live in and around Ulan Bator, the capital.

Just over half of all Mongols identify as Buddhists, with 3% embracing Islam, 2.9% shamanism, and 2.2% Christianity. Almost 39% report no religious affiliation, according to the World Factbook.

When Mongolia was a satellite state of the Soviet Union, Buddhists were persecuted.

“It’s a country that was taken over by the Communists. People were murdered because they were Buddhists. They were murdered for any religion,” she said.

Following the Mongol revolution of 1990, Buddhism experienced a resurgence.

Interfaith efforts can help create a bulwark so that Communists “don’t come in and take over,” Sims Smith said.

“When you stabilize the local people and allow them to worship in their own way and teach them to be friends with each other, you stabilize all of democracy,” she said.

With Kuten-la’s blessing, Sims Smith began creating material that could be shared with potential donors, she said.

â€œI worked with Amy Carper and her team to create the most stunning visuals you’ve ever seen for a development project,â€ she said.

The information was presented to Kuten-la in late 2019 during his visit to California, Sims Smith said. He received her enthusiastic support, she said.

She was in India in March 2020 to meet with Kuten-la and help organize a fundraising trip to the United States, but had to cut the trip short due to the rapidly developing pandemic.

“I was only there for two nights,” she said.

Since then, the project has been in a sort of waiting phase.

Even so, pledges started to arrive, she said.

“She’s very, very talented. She really captures the spirit of the people and the country and the essence of what you’re trying to do,” added Sims Smith.

Carper spent several days with Kuten-la and accompanying monks in Arkansas in 2016. In Mongolia, she documented the activities of Sims Smith and Kuten-la, capturing the celebrations.

Carper expressed her admiration for the Eastern religious traditions she encountered.

After the work portion of her trip was over, she set out for the Gobi Desert, riding a camel and enduring a sandstorm.

The desert weather has been beneficial, she says. “What this taught me is the importance of loneliness,” she said.

The time spent with the Kuten-la and the monks in Asia was extraordinary, Carper said.

â€œIt was a mind-blowing experience,â€ she said. “The energy was just phenomenal.”

The coronavirus then threw an adjustable wrench into the project, but Carper said she was determined to help it move forward.

â€œI’m not going to let the covid come in and shut everything down,â€ she said.

As a Christian, Carper said she believed that God can bring joy in the midst of suffering.

â€œYou have to go through the darkness to be brought to the light,â€ she said.

A group of Buddhist monks, including Kuten-la, a spiritual advisor to the Dalai Lama and the Tibetan State Oracle, visited the Arkansas House of Prayer in Little Rock in 2016. The Arkansans hope to help. to build a similar interreligious space in Mongolia. (Photo by Amy Carper) 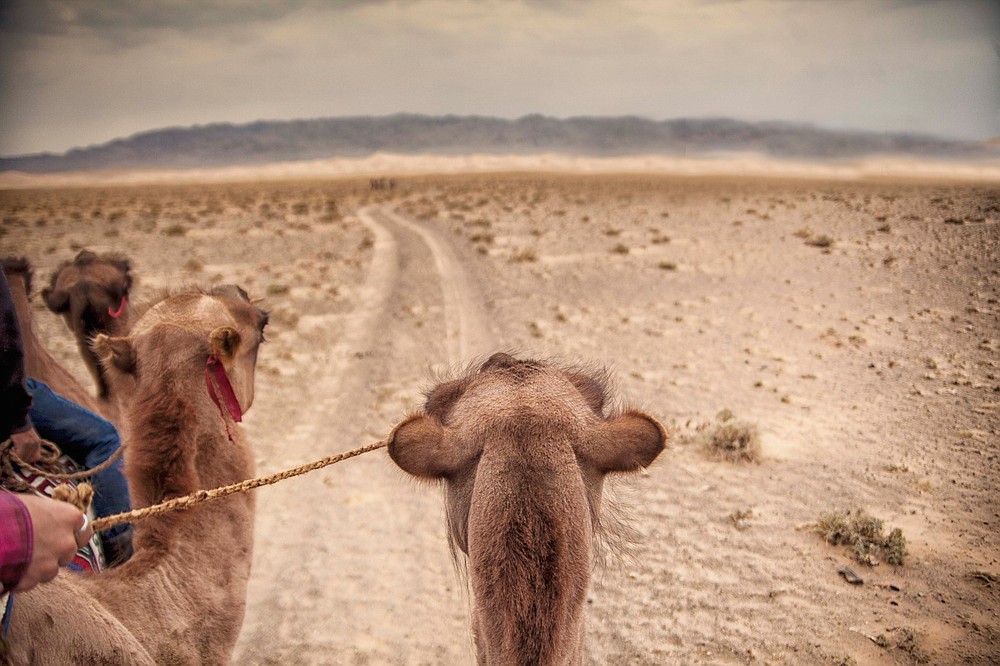 After taking photos of Susan Sims Smith, founder of the Arkansas House of Prayer, and Buddhist spiritual leader Kuten-la in Arkansas and Mongolia, photographer Amy Carper traveled to the Gobi Desert, riding the one of these camels during part of the trip. “What this taught me is the importance of loneliness,” she said. (Photo by Amy Carper)