Evangelism
Home›Evangelism›For many, the last leg of a spiritual journey

For many, the last leg of a spiritual journey

I go back to a page that says “I’m where I am and that’s OK. I know how to get where I want to be. I reach relief.

The Creative Thought Center is an interfaith community in Waynesville. The heart of his teaching is based on “The Science of the Mind”, a work by the writer, teacher and leader of New Thought Ernest Holmes (1887-1960). However, the Creative Thought Center explores the truths they see permeating many of the world’s great spiritual traditions. The bottom line? “We embrace all philosophies that do no harm to others or the earth.”

Ernest Holmes wrote “The Science of the Mind” in 1926. In the book, Holmes explores his belief that God is an endless source of energy that is present throughout the universe and in all beings. Through prayer, Holmes believed people could connect with God and heal spiritual, mental, and physical wounds.

“God is not…a person, but a universal presence…already in our own soul, already operating through our own consciousness,” Holmes said.

Holmes’s ideas can be understood through the prism of the New Thought Movement, a philosophical school that emerged in the 19th century that sought to connect science, philosophy, and religion.

An important tenet of religious science is the idea that all people are embodiments of God, or spirit, or universal force. In this sense, God is a self-knowing power. By acknowledging the divine within, people can tap into its infinite resources through affirmative prayer. Spiritual treatment of the mind or affirmative prayer is a form of prayer intended to dispel thoughts of denial, doubt, and fear, and instead perceive the abiding presence of God within oneself.

After the Sunday morning meditation, there is time for fellowship. In addition to its sanctuary, the Creative Thought Center has a kitchen area with a long communal table. Between meditation and the start of Sunday service, members can be found drinking tea and coffee and chatting with their community.

“There is an atmosphere of unconditional love,” said practitioner Joan Doyle.

The acceptance is enormous for the members of the center. They are committed to welcoming all people, regardless of sexual orientation, age, religious history or anything else.

The center does not currently have a minister, but four of its members are practitioners – members of the congregation trained to guide services and administer spirit therapy – with another member being trained to become a practitioner. .

The service that is taking place is one that any faithful Christian would recognize. First, the practitioner welcomes everyone and leads the congregation in prayer, then in song. Then a practitioner will give the equivalent of a sermon, or a homily. On Sunday, the speaker explored her journey in faith, from her Presbyterian upbringing to discovering religious science, with many stops at several different denominations and religious organizations along the way.

“There is a thread of truth that runs through all religious teachings,” she said.

This journey from other faiths to religious science is not unique among members of the Creative Thought Center. Kim Walzer, chair of the center’s board of directors, and Joan Doyle, board member and practitioner, were both born and raised in Catholic families. Eventually, both women found themselves uncomfortable with the Catholic Church.

“For me, it was very divisive,” Walzer said. “It separated me from people instead of giving me the opportunity to explore my own spirituality and how I was meant to move in the world.”

“I grew up in Ireland, went to convent, boarding school, all that stuff,” Joan Doyle said. “But around 18, I was like, that’s just not my idea of ​​God. My idea of ​​God is so broad and encompasses everyone. And saying ‘we’re the right religion’ was, in my heart and my soul, just plain wrong. I see God as all encompassing and loving every individual in whatever way they may manifest. And how could a person born in India not enter heaven simply because they were d a different religion? It was just wrong for me.

These two women discovered religious science once they began to seek a deeper spiritual experience. Doyle, as she explored churches while living in Los Angeles, and Walzer after a traumatic change forced her and her husband to uproot their lives and relocate to western North Carolina . One day, she stumbled upon the Creative Thought Center while out for a walk and immediately knew it was the place for her.

“There’s an energy with the center,” Walzer said. “I was looking for something different that was actually going to give me practical tools to live my life instead of rules and regulations that I no longer thought I would fit into. I feel like I was instantly transformed within a few months after my arrival there.

Since finding the center, Walzer has been lucky enough to be on the other side of the door when people first learn about the Creative Thought Center. She often hears the phrase “that’s exactly what I was looking for”. 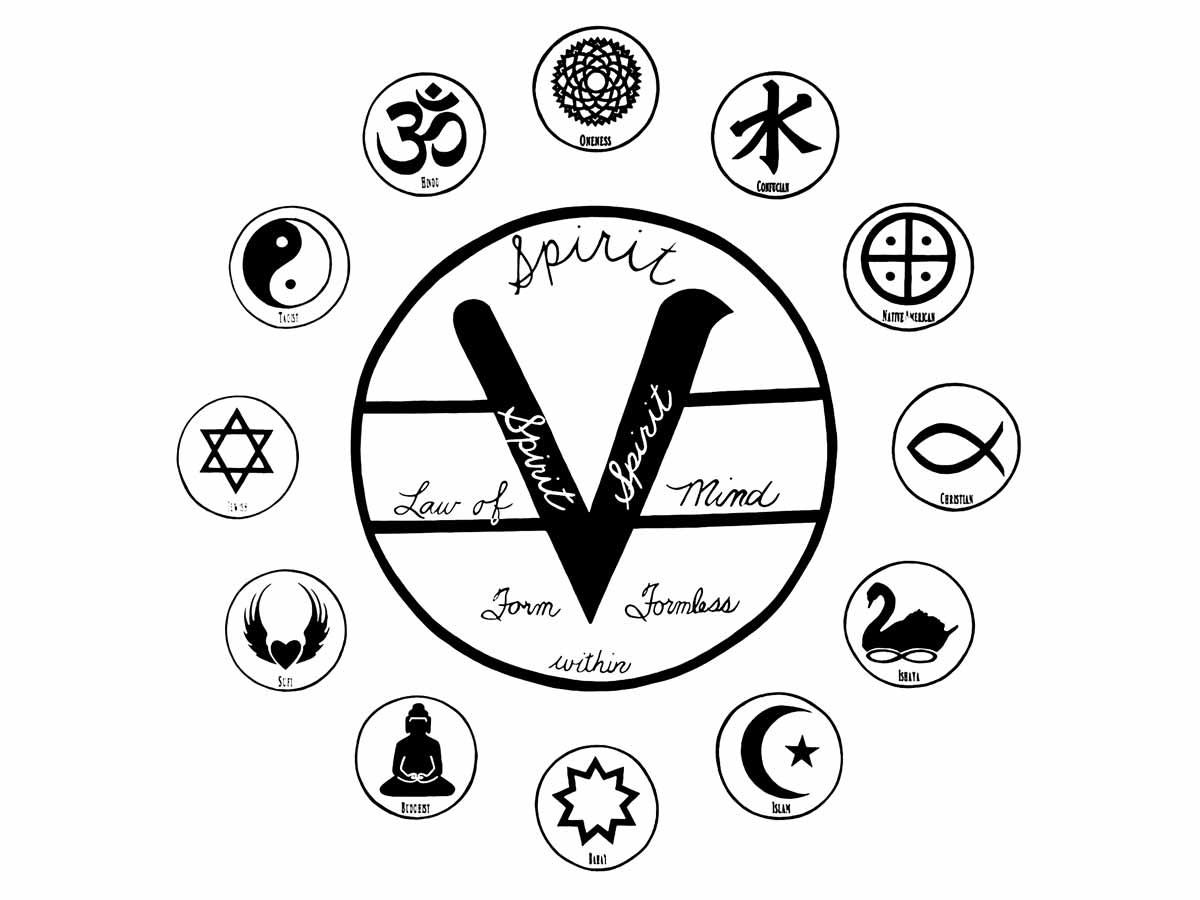 The symbol of religious science is painted on the back wall of the Creative Thought Center’s shrine, surrounded by symbols of religions around the world. Photo by Kim Walzer

The Creative Thought Center began in Reverend Trish Mackey’s living room in 1999. She had convened a book club to delve into “The Science of Mind.” Eventually, the band grew so big that they could no longer meet in the living room, and in 2000 the band got their own building. That same year, they drafted a charter and affiliated with Religious Science International.

“The science of mind is a religious philosophy, a spiritual philosophy, not necessarily a religion with stagnant belief systems that don’t grow and change,” Walzer said. “We welcome everyone. There are books by Dr. Ernest Holmes guiding us, but we don’t have a stagnant book that says you have to believe this or you can’t belong. And I think that opening just allowed it to continue to grow.

In 2012, the Creative Thought Center became an independent Science of Mind organization instead of affiliating with Religious Science International, a move that allowed the center to grow as members wanted.

The group continues to grow, albeit slowly, but eagerly awaits new faces coming through its doors. The current sanctuary can accommodate more than 80 people.

Unlike many religions, evangelism is not a tenet of religious science. Centers and practitioners are ready and waiting to welcome new members and explore their spiritual journey, but will not try to convince otherwise content beings to follow the path of religious science.

“Our mission is to provide spiritual tools for personal growth and transformation,” Walzer said. “Our goal is to support individuals on their journey to self-discovery. And our vision is to realize a world where all life thrives. Each of these truly encompasses the individual, instead of the ideal. We could be like many mainstream religions and say, “that’s what science of the mind means.” That’s what he represents. How do you fit in there? But instead, we say, “we’re here with a spiritual philosophy that works for us.” How can we support you?’ So it’s a little different from a lot of religions. Our job is not to transform people from what they are into what we want them to be.

The Creative Thought Center operates a thrift store next to the center on Pigeon Street. This outlet helps support the center and get involved in causes in the community. The center also hosts several group meetings throughout the week on different topics. There is a Law of Attraction group, women’s groups, men’s groups, and a weekly miracle course.

“It’s about really looking at our thoughts and our beliefs and asking, ‘How do we limit ourselves?'” Doyle said.